In a major training exercise Shropshire firefighters dealt with a “gas cloud” over Shrewsbury caused by a supposed chemical spillage at an oil depot.

Morris Lubricants volunteered their works site so that county fire crews could gain knowledge and practice their skills in dealing with a potential major incident involving hazardous materials.

The fictitious exercise involved fire crews from across the county answering a call to deal with a reported chemical spill and casualties after hazardous materials contained in a number of barrels were spilled while being loaded into a lorry.

Firefighters had to “rescue” two casualties overcome by fumes along with the fork lift truck driver and then identify the chemical code on the barrels which were leaking into a drain.

Some firefighters donned the distinctive green airtight chemical protection suits to contain 205 litre barrels inside special containers taken from the brigade’s environment unit called from Tweedale Fire Station in Telford. The unit is equipped to deal with all environmental threats. 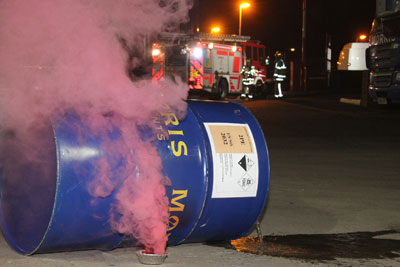 Special decontamination units were put up on site as they would in a real life incident to clean off any residue chemicals from firefighters.

Fire control and incident command procedures were monitored throughout the training exercise.

Senior officers observed how firefighters tackled the major alert while crews gained valuable experience so that they are ready to deal with any such incident in the county in the future.

Deputy Chief Fire Officer John Redmond said that they were valuable training exercises for firefighters who would be called to deal with such incidents.

“We are very grateful to Morris Lubricants for allowing us to practice at their site near the centre of Shrewsbury. We hold these exercises as regularly as we can as they allow us to practice operational procedures and rescue techniques.”

Andrew Goddard, Morris Lubricants’ managing director, said: “We were more than happy to work with Shropshire Fire and Rescue Service on this important training exercise to prepare firefighters to deal with major incidents in the county. We have a very good relationship with the service, which does fantastic work in often challenging situations to save lives and property.”

Crews attending the training event were from Shrewsbury, Oswestry, and Tweedale in Telford, along with the Environment Pod which carries specialist equipment to deal with pollution.