Shropshire’s fire chief has appealed to all drivers to take care on the roads this Christmas to avoid a potential tragedy.

Tragic deaths at this time of the year were “so poignant,” Paul Raymond told road safety advocates at Shropshire Council’s “don’t drink and drive” campaign launched at Shrewsbury FC.

The county’s Chief Fire Officer, who is responsible for road safety for Shropshire Fire and Rescue Service, is also president of the Shropshire branch of the Institute of Advanced Motorists. He was lending his voice to the annual appeal to county drivers.

He recalled how he arrived in a fire engine to a car crash as a young firefighter at Christmas time 30 years ago to discover his 19-year-old friend had died in the tragedy.

“The roads were extremely icy and we pulled up to find Pete dead. He had just proposed to his girlfriend and he was driving home after a celebration when the car crashed into a bridge wall.

“He died at Christmas and his family will never have a happy Christmas again.”

“We are asking the people of Shropshire to do something about it and not to drink and drive. Make plans. Get a taxi home, don’t walk down a dark alley or get into a stranger’s car or into a vehicle in which the driver has been drinking,” he said.

Campaign organiser Steve Chadwick, the council’s team leader for road safety, praised the joint scheme where everyone was working together to reduce the death and injury toll on Shropshire roads.

“It is so important that we try to reduce drink driving on our roads. One death is one too many.”

The fire service’s Outreach vehicle would be promoting the don’t drink and drive message at the Shrewsbury football ground in the run up to Christmas along with the council’s own road safety members who were giving out information to football fans.

The “don’t drink and drive” message will be promoted via a road safety competition at Shrewsbury Town’s match with Cheltenham Town on Saturday (11 December). A number of visits are also being made to colleges across the county to encourage young people to try non-alcoholic beer. 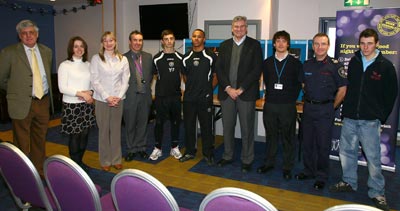 It will also link with a campaign being run by the council’s Safer Stronger Communities Partnership called ‘How are you getting home…?’

Shropshire Fire and Rescue Service linked up with Shropshire IAM last year to launch an education scheme aimed at keeping young drivers safe on the roads. Motorists aged between 17 and 25 are eligible for five hours of advanced driver training which includes one hour in the classroom and four hours on road training.

To be eligible, young drivers must have their own car, be fully taxed and insured and with a valid MOT. For more details visit www.advancedmotorists.org. The initiative gives them the chance to become full members of the IAM.