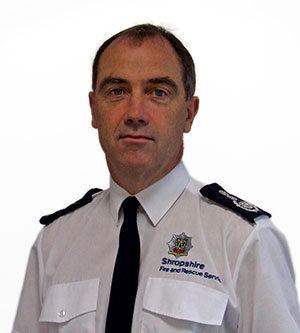 Shropshire’s fire chief has appealed for people to take extra care in bonfire celebrations during a two day firefighter strike.

A reduced service will limit the number of fire engines available which means that the public should not call out firefighters for minor incidents such as bonfires left unattended.

John Redmond, Chief Fire Officer for Shropshire Fire and Rescue Service, also appealed to county firms to cut the number of faulty automatic fire alarms to avoid a fire engine being called out needlessly when it could be required at an emergency.

The Fire Brigades Union from all fire and rescue services in England and Wales will strike on November 1st between 6.30pm and 11pm and November 4 between 6am and 8am.

The strikes are in support of the FBU campaign against changes to pensions proposed by the Department of Communities and Local Government.

Fire stations in Shrewsbury and Telford will be affected by the planned strike but part time On-call fire stations, mainly in more rural areas, are less likely to be hit.

“We have put in place contingency arrangements to provide reduced emergency cover for the whole county. This has involved the staffing of fire engines with wholetime firefighters who are not taking industrial action,” said Mr Redmond.

He appealed to the public to take extra care to keep themselves and their families safe especially during bonfire and firework celebrations over the weekend.

The Service’s Fire Control in Shrewsbury, which deals with 999 calls in Shropshire, will be unaffected by the strike.

“Our administration staff will be working as normal however some business and community fire prevention work is likely to be cut back.

“We are asking people to only call 999 if they really do need a fire engine. Our priority is to respond to calls where a life may be at risk or someone needs to be rescued. If we respond to non-emergency calls then those most in need could be at risk.

“We do find ourselves in an unusual situation where we must prioritise our calls for those who are most in need of our assistance. However, I must emphasise that you should still call 999 in an emergency so that an experienced control room operator can deal with your situation. You must not try and call your local fire station directly,” said Mr Redmond.

Shropshire Fire and Rescue Service has issued a ten point plan for safety around the house, at work, and on the road.