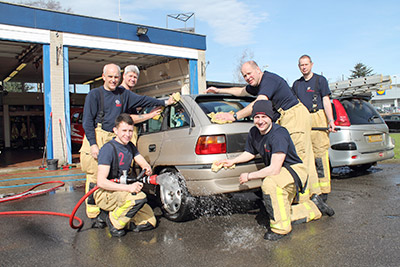 Shropshire firefighters armed with buckets and sponges have been taking part in the national Firefighters Charity car wash at fire stations across the county every Saturday in March.

They are raising hundreds of pounds for the charity which gives respite, recuperation and rehabilitation to sick or injured firefighters and their families.

A total of 11 fire stations in the county are offering the car cleaning service for a charity donation. Whitchurch firefighters raised almost £300 at their event last week.

“The events have gone from strength to strength. The local Barclays branch has kindly offered to match fund the donations collected as well as provide staff to take part,” said organiser Ashley Brown, a retained support officer from Bridgnorth.

Crews from Albrighton, Oswestry , Shrewsbury, Wem, Whitchurch and Baschurch have all washed vehicles for donations at their local fire stations.

Fire crews from Market Drayton and Hodnet will be at their fire stations on March 22 while Ludlow firefighters will be at Harry Tuffins petrol station on the A49.

Finally the month long event will conclude with fire crews from Bridgnorth at their station in Innage Lane, Bridgnorth.

The event takes place in March and September each year and raises nationally over £100,000 for injured firefighters and their families. Last September Shropshire firefighters from ten fire stations raised over £2,500 for the charity.

The Firefighters Charity is the only national charity which Each year the charity needs more than £8 million to secure the services at the three national centres around the country. The charity is entirely self funding and relies on the goodwill and generosity of donations from members of the public.

The services which the charity offer are open to all serving operational fire fighters, Fire Control, support staff as well as those who are retired.