An awareness raising campaign targeting young drivers is being launched today by the Safer Roads Partnership in West Mercia. The campaign focuses on risky behaviour and the distractions that young drivers may be faced with when they are behind the wheel.

Young motorists are over represented in road traffic collisions. According to figures from the Safer Roads Partnership, 31% of all collisions in West Mercia involve drivers aged between 17 and 24 years old. Over the past 3 years 18 people have been killed in Shropshire and Telford & Wrekin and 97 seriously injured following a collision involving a young driver, with driver behaviour being noted as the main contributory factor.

The campaign brings home the consequences of being distracted when driving and graphically highlights, for example, the impact of using a mobile phone or speeding when driving.

Advertising has been targeted to schools and colleges in the area. The campaign will also feature on outdoor advertising and radio in order to reach as many young people as possible.

Vicki Bristow, Communications Manager at the Safer Roads Partnership in West Mercia, says: "This age group are one of the most vulnerable groups on our roads. This campaign is designed to target this particular group and raise awareness of how important it is to not be distracted whilst driving. It is designed to demonstrate that highly risky behaviour, such as changing a track on an ipod or texting a friend can lead to catastrophic results.”

Temp Superintendent Lee Davenport of West Mercia Police comments: “West Mercia Police patrols will be supporting this campaign by taking a hard line against those drivers who flout the law. Being distracted by loud music, a phone conversation or text message means you will react more slowly to what is happening around you and take longer to brake. People who become distracted while they are driving are more likely to miss road signs and tailgate and find it difficult to maintain a steady speed or proper lane position. They also tend to drive faster placing other road users, particularly pedestrians, at high risk of injury.” 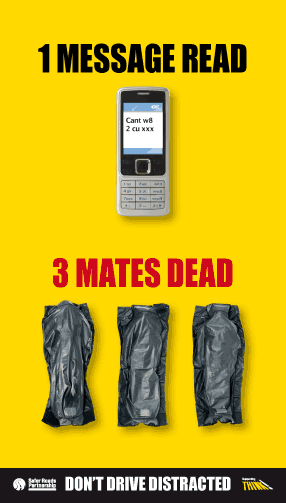