Shropshire fire fighters some dressed in specialist chemical protection suits dealt with leaking chemicals from drums dumped in Craven Arms recently – but it was just a regular training exercise for Shropshire Fire and Rescue Service.

Fire crews from across the county were called to Craven Arms in a reconstruction carried out to test Shropshire Fire and Rescue Services procedures for dealing with an incident involving a leak of chemicals.

More than 30 fire fighters all Retained Duty System personnel from stations in Craven Arms, Minsterley and Albrighton attended along with specialist officers from Brigade Headquarters.

A 999 call to the services fire control in Shrewsbury stated that a number of drums containing an unknown liquid had been found illegally dumped at the location and were giving off fumes.

Fire control personnel quickly mobilised fire appliances to the scene along with an Environmental Protection Unit based at Tweedale which carries specialist decontamination equipment. 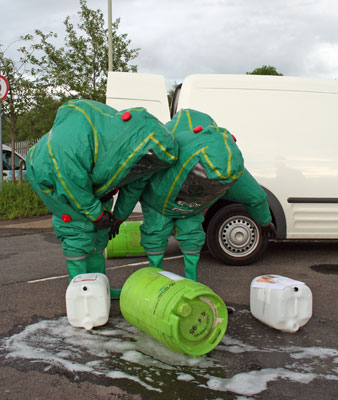 First on the scene were fire fighters from Craven Arms who wore breathing apparatus to initially carry out a snatch rescue to simulated casualties who had been overcome by the fumes from the leaking chemical. Once the rescues had been carried out fire fighters dressed in specialist chemical protection suits were sent to identify the chemical involved and to prevent and contain any spill which had occurred.

“These are valuable training exercises for us and we are extremely grateful to any business in Shropshire which can allow us to use their facilities for such a purpose.

We try and hold these training exercises as regularly as we can as they allow Shropshire’s fire crews to practice operational procedures and rescue techniques in as near to real scenario as is possible,” said Retained Support Officer Mark Smith. 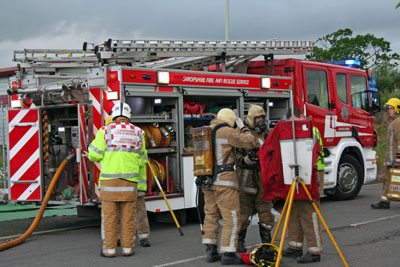