Uniq Desserts at Minsterley, a major county employer which has three retained firefighters on its staff, volunteered a section of their 27 acre site to create a realistic training venue for more than 30 firefighters during the night time exercise.

The firm’s health and safety manager, Andrew Holding, played the part of an employee who raised the alarm after staggering out of a business unit where ammonia is used to cool large fridges. He later stressed that the scenario would not happen in real life because of strict safety procedures at the plant.

Retained firefighters from Minsterley wearing breathing apparatus, were first on the scene to “rescue” two dummies to represent workers overcome by fumes and alerted their colleagues to the type of toxic chemical they would have to deal with. 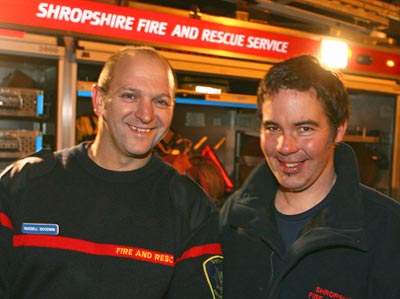 Retained firefighters Russell Goodwin and Shaun Groves who were first on the scene.They are both builders in their day jobs.

Firefighters put on the distinctive green protective suits to isolate the leak and were later decontaminated by their colleagues as incident commanders and control room staff at Shrewsbury brigade HQ tested their communication and command skills.

Retained firefighters from Bishops Castle and Baschurch along with wholetime crews from Shrewsbury also attended the training event which thoroughly tested their skills at handling a serious chemical incident.

The brigade’s Head of Fire Prevention John Das Gupta thanked Uniq Desserts for offering their food production site as a “perfect” training venue. He also praised the company for their support in releasing staff who were “crucial” for frontline firefighting duties.

“It helps us so much when employers such as Uniq Dairies give us a real production venue to create as realistic a training event as is possible.

“Shropshire Fire and Rescue service is one of the top performing services in the country which prides itself on ensuring we deliver the highest standards of public safety. We conduct a number of major exercises each year to ensure we continue to deliver this high standard.

“The exercise was designed to assess our competence in several areas including incident command, hazardous materials response, the rescue of several casualties, fire ground communications along with inter agency liaison.

Martin Watson, Corporate Social Responsibility & Risk Manager at Uniq Desserts’ Minsterley site said: “We are delighted to be able to support the Fire and Rescue Service with this practice exercise. We do have three retained firefighters who work here at the site and fully appreciate just what an important part they play in keeping the local community safe. 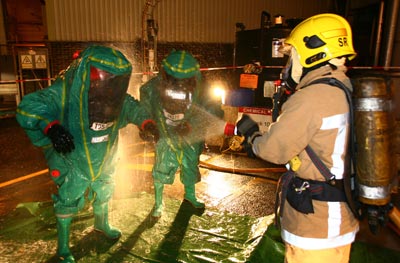 “We have very robust controls at the factory to ensure that incidents such as this dummy scenario do not happen however the exercise does provide both ourselves and the Shropshire Fire and Rescue Service an opportunity to put our procedures to the test.”

Uniq Desserts is one of the largest dessert manufacturers in the UK supplying all the major supermarkets and employs 600 at their Minsterley site.