Home › What's New and Social › News
Shropshire firefighters Adrian Richmond and Andrew Holt, from Wem, in chemical suits deal with a suspicious liquid leaking from drums at a county airfield in a training exercise for Shropshire Fire and Rescue Service

Shropshire firefighters in chemical protection suits dealt with suspect waste leaking from drums dumped at a county airfield – but it was just a regular training exercise for Shropshire Fire and Rescue Service.

Fire crews from across the county were called to Prees Heath Airfield at 7pm last night (Thursday) in a reconstruction carried out to ensure that the emergency services are prepared for any incident.

More than 50 firefighters from stations in Whitchurch, Market Drayton, Hodnet, Wem, and Shrewsbury attended along with the environment pod carrying specialist equipment from Tweedale in Telford. 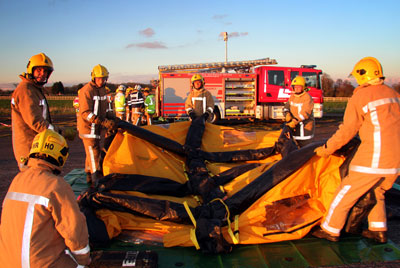 A 999 call to fire control in Shrewsbury stated that a number of drums containing an unknown liquid had been found illegally dumped at the north Shropshire airfield and were giving off fumes.

Rescue pumps were quickly mobilised to the scene along with specialist chemical decontamination equipment and specially trained fire officers.

First on the scene were firefighters from Whitchurch who wore breathing apparatus to initially deal with the suspect waste drums and call in colleagues to identify the chemical involved. 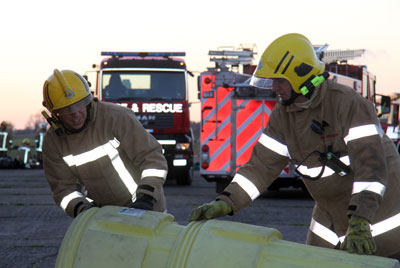 Head of Fire Prevention Martin Timmis said: “It is vitally important that firefighters are trained in realistic scenarios such as this one in which they dealt with the incident in a very professional and well trained manner. This is all done to protect the people of Shropshire from any real life incidents that we may face in the future.”

Firefighters wore the distinctive green airtight chemical protection suits to deal with the incident while fire control and incident command procedures were tested during the training exercise. 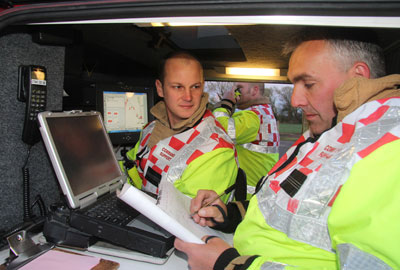 An incident command post is set up on the airfield. Left to right, Shrewsbury firefighters Stephen Wesley, Kent Hallihan and Dale Jinman

Senior officers observed how firefighters tackled the major alert while crews gained vital experience to be prepared for any such incidents in the county in the future.

“These are valuable training exercises for us and we are extremely grateful to R.T.Matson and Sons for allowing us to practice at their site. We hold these exercises in hazardous materials as regularly as we can as they allow us to practice operational procedures and rescue techniques,” said exercise director Mac Harris.