Don’t forget to get your chimney swept before the cold weather begins – that is the message to Shropshire householders to avert a blaze this Winter.

Shropshire firefighters attended 189 chimney fires in the county in 2010/11 and statistics show this could increase again this year unless home owners take action.

Chimney fires have shot up over the past two years as people search for cheaper fuel to heat their homes after huge hikes in gas and electricity prices.

Firefighters in north Shropshire have linked up with Shropshire Gas to give advice on fuel for open fires and woodburners as part of a countywide fire safety campaign.

Leaflets to promote the fire safety campaign are being jointly distributed by firefighters and some chimney sweep businesses as part of the campaign. 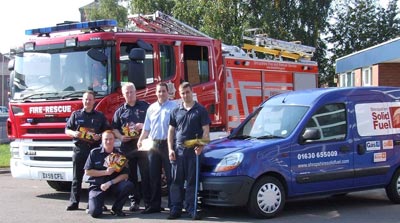 “Using the correct fuel and getting the chimney swept at least once a year are a vital part of keeping safe this winter,” said chimney sweep Rob Haywood.

Chimney fires can be avoided by:

“An open fire is an ideal way to keep warm but without proper maintenance a chimney can be dangerous,” said Rabinder Dhami, team leader at Shropshire Fire and Rescue’s Community Fire Safety department based in Shrewsbury.

“To keep yourself and your family safe from fire you should have your chimney swept before the cold weather sets in and ensure that you have a working smoke alarm.”

Last year fires from chimneys were on the increase in Shropshire as people used unseasoned wood causing sap to stick to the chimney sides and set on fire.

The remains of bird nests in chimneys are also a hazard.