Specialist rescue crews from Shrewsbury, Telford and Wellington carried out a dramatic rescue on the River Severn last week in Coalport.

A couple had gotten into difficulty in their hire canoe after it hit a rock and capsized. The incident happened about 400m downstream from the Woodbridge Public House.

The alarm was raised when people at the nearby caravan park heard cries for help.

The couple in their 50’s also had their dog with them and were clinging to the capsized canoe until fire crews arrived. A well-meaning member of the public had also got into difficulty when they waded out to try and assist.

All three people and the dog were successfully rescued by specially trained Fire and Rescue Service “Swift Water Rescue Technicians” and treated at the scene by paramedics. A rescue boat from Shrewsbury fire station was also on standby to assist.

Station Manager Andy Griffiths, of Shropshire Fire and Rescue Service, “Even with the dry weather we have had recently, and water levels being relatively low, the river can still be a very dangerous place. Hidden rocks just below the surface and fast flowing water can be perilous for inexperienced people.”

He added a word of caution, “We would never advise untrained people to wade out or attempt to swim in the river as they could easily get into trouble and require rescuing themselves, as happened today.”

Thankfully this particular incident had a happy ending. 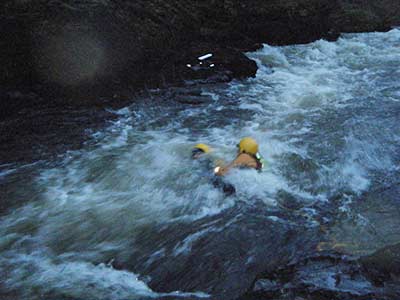