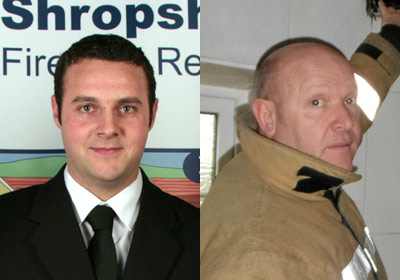 Firefighter training helped save a choking man collapsed on the ground at a Shropshire show, it was revealed today.

Three fire crew members from Shropshire Fire and Rescue Service, trained in resuscitation and first aid, were called to use their lifesaving skills on a man aged in his 60's who was struggling to breathe.

Oswestry "on call" firefighters Adrian Bowen, Tim Davidson and James Lewis had been on duty giving out fire prevention advice as part of their community fire safety duties at Oswestry Show when the alarm was raised.

A man ran to the fire engine, where people were queuing to board, calling for firefighters to help after he had seen the man collapse in a show tent near the arena at the Oswestry show ground at Park Hall.

Firefighter Tim Davidson, who runs his own electrician firm, grabbed the first aid kit as he and his two colleagues ran the 80 metres "in record time" to the tent where the man was choking.

"He was gasping for breath, coughing, and lying face down on the floor. Initially we didn't know if he'd had a heart attack. He banged his chest in panic and managed to tell us that something was stuck in his throat," said Oswestry Crew Manager Adrian Bowen, whose day job is a Royal Mail postal supervisor.

Firefighter James Lewis, a delivery driver for an Oswestry firm, put the man into the recovery position while Tim Davidson got the resuscitation equipment as all three firefighters helped to put a pipe down the choking man's throat to dislodge the obstruction.

It was later revealed that a piece of crackling had led to the trauma.

"As a firefighter, you go through so much training until these sort of things become second nature. You don't always expect to use first aid but this just shows how vital our training is. This man was lying on the ground trying to get his breath when we got to him and people nearby were frightened for him, not knowing what to do," said Adrian, a firefighter at Oswestry Fire Station for 21 years.

"Fortunately as a firefighter you do high level training which prepares you for this sort of thing."

"Firefighters come from all walks of life. These three Oswestry firefighters included a postal supervisor, electrician and delivery driver and they are all highly trained Shropshire firefighters. This is their job. To answer a call, whatever it may be, to help people in need," said Mr Redmond.