Thousands of Shropshire pupils have learned potentially lifesaving information about community safety while having lots of fun in Shropshire Fire and Rescue Service’s annual fire safety quiz won this year by the Thomas Adams School in Wem.

Deputy Chief Fire Officer John Redmond said this quiz has improved the knowledge of over 4,500 school children within Shropshire that have taken part.

Year 7 pupils from 34 Shropshire secondary schools learned hundreds of facts, figures and expert advice compiled in the Be Cool Be Safe magazine which can also be accessed at www.becoolbesafe.co.uk.

It was very important knowledge which pupils now had ranging from checking that their home had a working smoke alarm to knowing the dangers of getting into a car with a drunk driver, said Mr Redmond.

“This vital community knowledge will be taken back and shared with families and friends to benefit everyone.”

He praised police, ambulance, local councils and others who had all helped to provide the information in the booklet as part of the well established Be Cool Be Safe education programme which had been worked on in classrooms across the county.

A total of eleven schools won through regional finals to take part in the grand final held at Telford Fire Station, fighting it out for the title and a £500 cheque for the top school.

Community Fire Safety Officer Charlie Cartwright delivered a series of rapid fire questions to pupils before they took part in a fast and furious race to put on fire kit including trousers, jacket, boots and helmet.

They learned information including what to do if there is a gas leak, how arson attacks were responsible for £100 million damage each year, there were 30,000 hoax fire calls in 2007 and that fires cause £2 million damage to homes, schools, offices and factories every day in the UK.

Children learned that the most common causes of fire start as a result of cooking, cigarettes and smoking, electrics, matches, lighters and candles. In Shropshire, the number of fires is reducing because of successful fire prevention education carried out by firefighters.

A team of four from the Thomas Adams School in Wem came out on top in the quiz beating Meole Brace School into second place and with the Charlton School third and Newport High School taking fourth place. Other schools taking part in the grand final were Oldbury Wells, Abraham Darby, Church Stretton School, Oswestry School, Burton Borough, Phoenix and The Grange School. 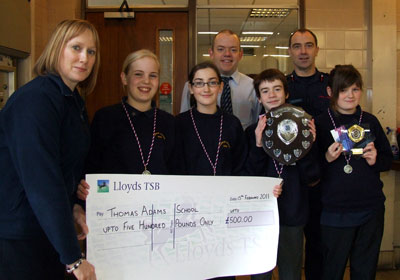