Volunteers from Shropshire Fire and Rescue Service have won a major award for their charity efforts in aid of Bulgarian orphans.

The ten strong group of firefighters, councillors and a control room operator raised more than £3,000 for three orphanages with a number of fund raising activities including the Oswestry Santa Run, a bucket collection at Shrewsbury Town FC and donations and raffles.

They were presented with the Telent Charity Shield, an annual award for those making an outstanding contribution to charity, during the annual long service and good conduct medals ceremony for firefighters and staff held at Shrewsbury’s Theatre Severn.

Presenting the award was Telent project manager Dharminder Thiara, who said: Charity is a main objective in our lives. You have done a great job to put a smile on little children’s faces and represent the fire service in Bulgaria and helping people who need help.”

During a visit to Bulgaria last year funded by the EU’s Leonardo Staff Exchange Programme, Shropshire volunteers transported and donated two fire engines, uniforms and equipment to the Ruse fire service. They gave 200 donated smoke alarms to the orphanges and delighted youngsters with Shrewsbury Town football strips and a collection of soft toys. 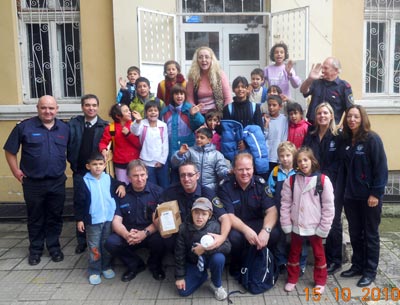 Shropshire firefighters bring gifts for the children at the orphanage

Ruse firefighters, acting on behalf of the group, also bought and delivered toys to the youngsters last Christmas.

“What is inspirational and worthy of recognition through the Telent Charity Shield is the coming together of such a diverse range of staff and elected members to work together to support those less fortunate than we are,” said Chief Fire Officer Paul Raymond. 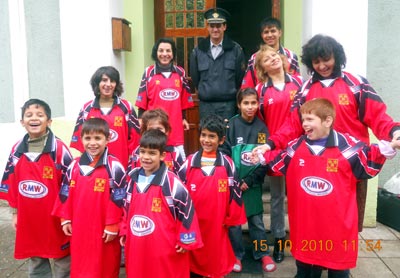 Shropshire firefighters bring gifts for the children at the orphanage

A Copthorne school governor, Nick is studying for a youth and community studies degree at Wrexham Universitty while also working with young people as part of his course.

He gives up much of his spare time working with the youth support services in Telford as a mentor to help youngsters get their lives “back on track.” He has worked with the youth parliament and works with children who deliberately set fires.

Nick, who raised £5,000 in one London marathon for the Cystic Fibrosis Trust is now in training for a charity cycle ride from London to Brussels. 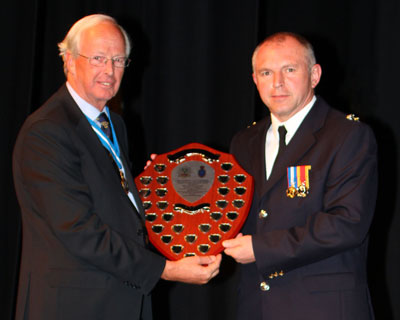 Presenting Long Service and Good Conduct Medals to 22 recipients, the Lord Lieutenant, Algernon Heber-Percy said: “Thankyou for all you have done for the past 20 years for looking after so many people in Shropshire.

Whitchurch retained firefighter Martyn Barlow, who followed his father Neville into the fire and rescue service, attends emergency incidents while working in the vending industry for the Cherwell Group. He is married with two grown up children.

Paul Dutton is also able to attend fire calls while working for his parents in the family motor business at Station Motor Services, Whitchurch.

A prison officer at Stoke Heath, father of three Wayne Edwards is a retained firefighter at Market Drayton fire station.

Joiner Gwynfor Benjamin, who recently retired as a Ludlow firefifghter after 20 years service, praised his employer Treasure and Son building contractors for their support during his 38 year career with them in which he regularly answered emergency calls for the fire service.

A representative with the Fire Service Benevolent Fund, Gwynfor attended the Jubilee Ceremony in London, which the Queen attended as the charity’s patron. He took part in a cycle ride from Boston to New York in aid of the fund.

Phillip Juson recently retired as crew manager at Ludlow Fire Station after a 20 year career and was gave 24 hour fire cover while working at F.W.McConnel’s agricultural engineers. Married to Jan, the couple have two grown up children.

Cleobury Mortimer crew manager Andrew Davies is a father-of two and has a partner Shannon.

Ludlow firefighter Jeremy Powell-Bevan is the manager at Howden’s Joinery in Shrewsbury where he has worked for the past 15 years.

Jeremy has taken part in a number of national competitions for retained firefighters along with colleagues at Ludlow Fire Station which included a trip to Belfast for the National Extrication Competition.

Kevin Faulkner joined the service as a retained firefighter in Newport before becoming a wholetime firefighter in 1996. Married with two children, he was promoted to crew manager, watch manager in training, station manager in Incident Command before being appointed to his present role last year as Group Manager Operations.

Martin Huckle joined Shropshire Fire and Rescue Service in 1997 after seven years as a retained firefighter at Welshpool, Brecon, Powys and Llandrindod Wells. He now serves as Watch Manager in fire safety at Telford. Married to Hazel, the couple have two grown up children.

Father of three John Morgan is Crew Manager at Tweedale Fire Station after joining the service in 1990. He has five grandchildren.

Steven Moss is Crew Manager on White Watch at Wellington Fire Station after first joining as a retained firefighter at Wem. He became a wholetime firefighter in 1994 serving in Shrewsbury and now Wellington. Married to Jackie, the couple have two teenage children.

John Pritchard is Watch Manager on Green Watch at Tweedale Station where he joined as a retained firefighter 20 years ago. He has also served at Telford Central fire station. Married to Debbie, they have two grown up children.

Player manager of the brigade’s football team, Gary Thompson is a firefighter on Blue Watch at Wellington Fire Station after first joining the service as a retained firefighter in Shrewsbury. A national table tennis player, Gary won a gold medal wiith his partner Jane at the mixed doubles at the World Firefighter Games in Sheffield. The couple have five children.

Shrewsbury firefighter Peter Hyde joined Shropshire Fire and Rescue Service in January 1990 as a firefighter at Telford Central Fire Station before transferring to Shrewsbury Fire Station in 2003. Peter lives with his wife Maxine.

Mel Kapitanec joined Shropshire Fire and Rescue Service as a retained firefighter at Shrewsbury Fire Station. He was appointed Retained Support Officer in 2006. A former retained Crew Manager, he serves as a temporary retained Watch Manager at Shrewsbury.

A training instructor for the High Volume Pumping Unit, Mel was involved in the major flooding at Tewkesbury and Doncaster. He also worked on the large oil fire in Buncefield in 2005 and took part in a major flooding exercise in Holland. Married to Jan, the couple have a son and daughter and grandson Joshua.

Control room operator Madeline Maisey is the Watch Manager in control after joining the service in 1990. A former Crew Manager in Control, Madeline has two grown up daughters and a baby grandson Joseph.

Mother of two Chris Page started with the fire service as a clerk/typist before working in fire safety. She is the Community Fire Safety Administration Support Team Supervisor.

Fire authority chairman Stuart West presented miniature medals to wives and partners and thanked them for their valuable support which was an important contribution to the brigade.

“The job of firefighters is sometimes very hazardous. They run towards an emergency when every sensible person is running the other way.”