“We are hugely grateful for what you do. You are never thanked enough. It is only in an emergency when people are affected,” said Algernon Heber-Percy at a special awards ceremony held at the Theatre Severn in Shrewsbury.

He also praised Chief Fire Officer Paul Raymond, who is due to retire next month, for his skill in “keeping Shropshire Fire and Rescue Service together” after implementing severe budget cutbacks.

“The hours of a firefighter are not conducive to family life and with the danger is the stress on families waiting at home,” the Lord Lieutenant told firefighters.

“We do take it for granted that you rescue people from fire in the middle of the night. You run towards a disaster when everyone else would run away.”

He praised them for their vocation which required commitment and dedication.

Retired firefighter Dave Bishton, from Albrighton, was praised for making an “outstanding” contribution to charity. He received both the Telent Charity Shield and the Firefighters’ Charity Certificate of Achievement for being the “driving force” behind raising thousands of pounds for charity during his career. 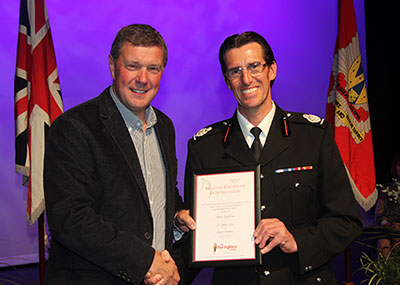 He arranged football matches, sponsored sports events and car washes and encouraged teams of people to get involved to raise funds to help injured and retired firefighters’ and their families, said Chris Metcalfe, of Telent, the company supporting the award.

Dave has served at fire stations in Telford and Wellington and ended his career as a staff officer working at Shrewsbury fire HQ.

Assistant Chief Fire Officer Steve Worrall received the High Sheriff’s Good Citizen’s Award for his international humanitarian aid in supporting poorer fire brigades in Bulgaria, Romania, Czech Republic, Hungary and Poland. He organised the delivery of 13 redundant UK fire engines, hundreds of desperately needed firefighting uniforms and rescue equipment. Under funded orphanages and a home for the handicapped in Romania have also been helped by Steve and colleagues over the past few years.