Shropshire Fire and Rescue Service has received a top accolade for its NVQ delivery for both firefighters and non-uniform staff.

The county’s Training and Development Centre at Telford Central Fire Station has been praised as “outstanding” after an external audit.

The national praise comes as it was revealed that Shropshire Fire and Rescue Service is held up as a “beacon” of training excellence with other services across the country looking to share its Firefighter Development Programme.

Edexcel, the awarding body for Operations in the Community NVQ carried out the audit across all areas of learning and development support for operational personnel undertaking NVQ’s.

In a Quality Review and Development Report, it stated: “Shropshire fire service is a centre of outstanding practice. All quality procedures are not only in place but are being used effectively within a close knit and dedicated team.”

Feedback to learners was “robust” and extensive ensuring progress and achievement while induction onto the NVQ qualification was detailed so that all learners were fully aware of the demands of meeting the required standards.

Andy Perry, Head of People Development and Safety at Shropshire Fire and Rescue Service’s St Michael Street HQ in Shrewsbury, said the accolade was well deserved by members of the People Development department who had all worked extremely professionally to create an outstanding training and development culture within the service.

The team had adapted its own Firefighter Development Programme to meet NVQ requirements which worked well for the service and was now being introduced by other fire and rescue services, he said.

Firefighter Jamie Hammonds (28), a university graduate who joined the service almost two years ago, said: “The delivery of the NVQ qualification is all relevant to the practical work we are doing as firefighters. It gives you structure and it is very well organised. You learn on the job and get instruction from senior colleagues to ensure that we are competent in everything that we do.” 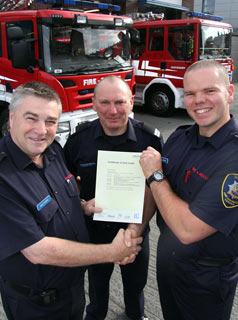 After completing initial training, firefighters spend up to three years achieving their NVQ qualification to develop new skills appropriate to their firefighting role and work in community fire safety. They are assessed by senior colleagues while carrying out fire and rescue duties and community fire safety work.

Shropshire Fire and Rescue Service is recognised as one of the best of the UK’s 43 services and consistently achieves a high level in national audits for its across the board procedures and it has succeeded in reducing the number of fires in Shropshire homes.