Shropshire firefighters put their lives “on the line” for his sister – and in return Sam Smith has now joined their ranks and become a retained firefighter at Shropshire Fire and Rescue Service.
Sam was just 18-years-old when he was forced to jump out of a top floor bedroom window as fire rampaged through his Shrewsbury home. He broke his back in the fall and probably would not have survived if he hadn’t jumped.

His sister Laura was seconds away from dying when highly trained firefighters raced through the burning building putting flames out as they ran unsure if they would be able to get back down the burning staircase.

They found Sam’s sister in a bedroom, gave her their oxygen line, and carried her to safety in a remarkable act of sheer bravery. Firefighters John Bee and Richard Blazier received bravery awards for their selfless actions that night.

Sam, a Maitre d’ at Paulo’s restaurant in the town, never forgot their courage in saving his sister with just seconds to spare on that Summer's night in July 2010.

On the evening of Monday, October 22, Sam and 17 of his newly trained colleagues will pass out as retained firefighters watched by Sam’s proud family in a ceremony at the Theatre Severn in Shrewsbury. Sam, who overcame a broken back to pass the tough fitness criteria, will have realised his dream.

“I don’t want anyone else to be in the situation that Laura and I found ourselves in. I want to help as much as I can and the only way to do that is by joining the fire service,” vowed Sam, who is now working with one of the firefighters who helped get his sister out alive.

“I wasn’t sure if I would be able to join because of my injury but the back has healed nicely and I passed the medical.” 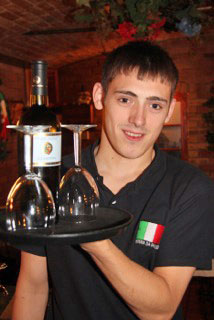 Working as a Maitre d’ at Paulo’s restaurant in Shrewsbury

Chief Fire Officer Paul Raymond said: “It’s great to welcome Sam to the service. He, like all of our firefighters, will be ready at any time to carry out the sort of rescues he experienced personally on that dramatic evening.”

Now living in Ditherington, near Shrewsbury, Sam applied to join the retained service a year ago.

“When I left school I never thought I would become a firefighter. It’s a good career and I can’t believe I’ve done it. I am really happy now I’ve got in and it is amazing how it all came from that terrible house fire.”

Sam’s sister is also now considering joining the fire and rescue service. Also working as a waiter in another Shrewsbury restaurant, Laura is working hard in the gym preparing to pass the fitness tests before making her application.

If you want to become a retained firefighter in Shropshire contact Shrewsbury Fire HQ on 01743 260 200 or visit our on call firefighter pages.