Home › What's New and Social › News
Crew Manager Steve Moss and firefighter Jenny Cranage learn how to deal with a horse from Sarah Bridgman (left) as part of their animal rescue training at Tong Farm, Shifnal

Shropshire firefighters are learning how to handle animals at a Shropshire farm to help them carry out animal rescues in the county.

Farm animals, including bulls and cows, are rescued by Shropshire Fire and Rescue Service after becoming trapped on farmland while horses and a variety of other animals including geese, ducks, sheep and dogs can also find themselves in need of help from fire crews.

“It's important that firefighters know exactly how to behave around animals when we are called to a rescue,” said Andy Griffiths, an Assistant Group Commander based at Wellington.

Tong Farm owner Sarah Bridgman invited White Watch to visit her livery to give firefighters a “valuable insight” in how to behave around horses and firefighters would be returning to learn more handling techniques in the future, she said.

The specialist Rescue Tender based at Wellington Fire Station carries equipment including a crane, animal strops and harnesses ready to respond to animal rescues in the county. 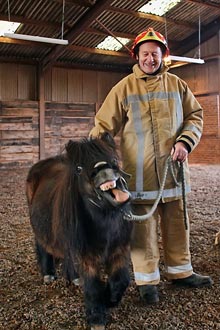 A young bull was rescued by firefighters in 2009 at Forton Hall Farm, Shrewsbury after falling into a disused well. 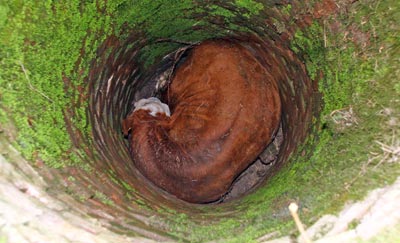