Firefighters who were “tested to the limit” when they rescued elderly residents in a serious fire at a Shropshire care home were praised for their efforts which led to everyone getting out alive.

Deputy Chief Fire Officer John Redmond also paid tribute to staff at the Extra Care home in Madeley, Telford, for their professionalism in being so well prepared for such an emergency.

It was in the early hours of October 8 last year when fire broke out in one of the 62 apartments in the top floor of the three storey home in Chilcott Gardens. A total of 20 residents were initially reported to be trapped inside.

Firefighters wearing breathing apparatus entered the top floor hallway where Lee Guinea and Mark Barnett checked rooms and found Marion Broome (88), who uses a wheelchair, coughing from the choking smoke. She was quickly rescued by fire crews as were all the other residents on the top floor.

“It was fortunate we were just two minutes away. When we got there you couldn’t see in front of you because of the thick black smoke. You could see the look on the faces of the elderly residents and clearly our priority was to save life. We needed to get them out as quickly as we could,” said crew manager Craig Jackson.

Marion, who was treated in hospital for smoke inhalation, attended yesterday’s award ceremony in which residents thanked the firefighters who saved them.

“I was scared that night in my bed with smoke all around. But the firefighters told me I would be alright and not to be frightened,” said Marion.

Mr Redmond said lives could have been lost that night if it wasn’t for the joint actions of staff and fire crews who worked together to rescue the residents.

He praised staff for “being prepared” by practising fire drills, keeping fire doors closed and having such well trained staff who knew exactly what to do in an emergency.

“There is no shadow of a doubt that if it wasn’t for the staff and the information and assistance they gave to our firefighters that it could have been a completely different outcome that night,” said Mr Redmond.

Care home manager Carole Welch said: “I am so proud of the staff. They were so good that night.”

A total of 30 firefighters from four fire stations at Telford, Tweedale, Wellington and Much Wenlock attended the fire in four appliances.

Four residents were rescued by firefighters wearing breathing apparatus. Another 14 were safely escorted out of the burning building. 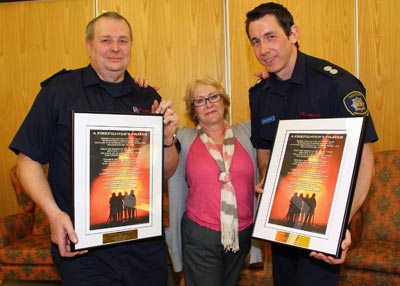