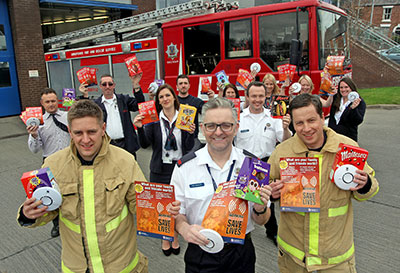 They are calling on everyone in the Shropshire area to spread the word to friends, family and neighbours about the importance of every home having a smoke alarm that works. “When you wish someone a happy Easter this year, it would be a kind thought to also deliver a vital fire safety message which could save someone’s life one day,” said Delyth Humphries, of the Community fire safety team.

“We would urge people to ask friends or family members, particularly if they are elderly, to check their smoke alarm works when you see them over the Easter break.

Many people forget to regularly test and maintain their home’s smoke alarms which means they may not work to give a potentially lifesaving warning during a fire, she added. In 2012 to 2013, 1 in 5 accidental house fires attended by firefighters in the county had no smoke alarm installed. “Without a working smoke alarm you are four times as likely to die in a house fire.

Every home should have one alarm per floor as a minimum,” said Delyth. Members of the Shropshire Fire and Rescue Service are visiting Shropshire’s market towns and shopping stores during the campaign, which starts on April 11, to get over the fire safety message. For more information about fire safety call the safety in the home team on 01743 260200.