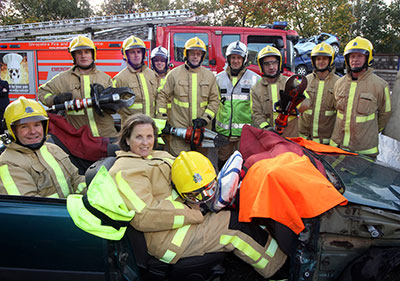 Shropshire’s High Sheriff was in the driving seat to see at first hand how firefighters rescue victims of county road crashes when she was cut free from the wreckage of a car.

The Deputy Lieutenant for Shropshire, who was appointed High Sheriff in April, volunteered for “the hot seat” to highlight the importance of Shropshire Fire and Rescue Service in the community and Road Safety Week later this month.

The High Sheriff, wearing firefighter overalls, jacket and safety goggles, saw at very close quarters what it is like for motorists cut out of their vehicles after a vehicle crash on Shropshire roads.

Firefighter Roger Haydon, a trained trauma technician, sat behind the county dignitary to hold her neck and head straight and reassure her every step of the way as in a real crash.

“Normally we don’t have the comfort of sitting in the back seat. We have to crawl into some difficult cramped positions to get at the car occupants,” he said.

The car was stabilised so it didn’t move during the rescue, hose reel jets were prepared in case of fire and the car battery disconnected. Airbags are de-activated if present.

A clear cover was put over the driver to prevent her being cut by showering glass as the windscreen and boot door were removed. The passenger door was removed with a hydraulic spreader, front pillar sawn off and the car roof taken off in double quick time.

“This is a straightforward extrication, normally a car is twisted out of all recognition, smashed into a tree, rolled over into a precarious position and other vehicles involved at the scene,” said Neil Griffiths, Assistant Group Commander at Shropshire Fire and Rescue Service.

He said that car roofs were not normally removed unless paramedics at the scene required it after assessing the patient’s condition.

“I can imagine that if you were in a crash you would be traumatised and shaking with shock so it was very re-assuring to have Roger, the casualty care firefighter, holding my head steady and reassuring me all the way.

“He told me about the noise and jolts from the cutters before it happened. It was all very quick, calm and done in a highly professional way. It was actually a very positive and reassuring experience to know how well cared for you are by such dedicated professionals.”

She praised Harlescott scrapyard owner Mike Jarvis who supports the brigade by letting their fire crews regularly hone their rescue techniques on scrap cars – a vital resource provided free of charge and which saves the service £3,000 a year.

Diana Flint follows in the footsteps of her High Sheriff predecessor Anna Turner who, during her term in office was soaked to the skin when she took part in a practice river rescue as well as a car rescue by county firefighters.

A total of 23 people were killed in road crashes on county roads last year and 156 seriously hurt. A total of 14 people have died this year and 82 seriously injured.

With a high number of young people involved in road accidents, Shropshire Fire and Rescue Service runs a free driver training scheme with the county branch of the Institute of Advanced Motorists. The 17 to 25’s go out with a trained observer and take the advanced driving test.