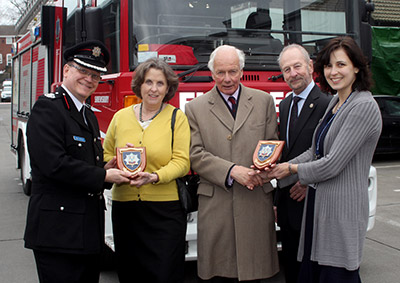 Shropshire’s Lord Lieutenant and High Sheriff had an elevated view in an Aerial Ladder Platform as part of a tour of Shropshire Fire and Rescue Service.

The two dignitaries were visiting Shrewsbury fire HQ which re-opened two years ago after a major renovation to overhaul the existing 1970’s dilapidated buildings.

Assistant Chief Fire Officer Andy Johnson said: “This has been a good opportunity for us to raise awareness about all that we do at Shropshire Fire and Rescue Service despite the budget cuts that everyone is experiencing.”

During the tour of the fire HQ, the VIPs saw the brigade’s specialist resources including the ALP and Water Rescue Unit and watched a training exercise on the drill yard.

Watch Manager Martin Huckle showed them the boat rescue equipment while Cameron Taylor explained the role of fire safety for half a million population and 18,000 businesses in Shropshire which has the UK’s largest inland fire and rescue service.

Station Manager Neil Griffiths talked about the recent rapid mobilisation of Shropshire’s on call firefighters to help with the flood relief in the south of England and how 60 firefighters dealt with a recent turbine explosion at Ironbridge Power Station.

While Station Manager Guy Williams spoke of how the Safety in the Community Team were working to reduce arson attacks, carry out patrols with police and advising on the hazards of derelict buildings.

They met many of the staff who keep the brigade operating, toured the control room and visited the emergency vehicle workshops.

The Lord Lieutenant said: “We are both delighted to have come. We both have great respect for what Shropshire Fire and Rescue Service does for us. This is our opportunity to say thank you.

“We appreciate their skills and we are very fortunate to have such highly professional firefighters who keep us all safe,” said Sir Algernon Heber-Percy, who was knighted in the Queen’s New Year’s Honours.

The High Sheriff Diana Flint added: “The experience in the ALP was tremendous and allowed us to see everything from a firefighters’ view. It is a brilliant fire and rescue service for the county and we are lucky to have such a fantastic fire HQ.”

Plans to close four rural fire stations and lose a major fire appliance have been shelved for now after a major public outcry and a delegation of MPs to the House of Commons. The service is still considering a possible merger of its control room with a neighbouring brigade and is changing shift systems and reducing support staff as part of continued budget cuts.

Shropshire Fire and Rescue Service has 100 firefighters based at 24 hour full time fire stations in Shrewsbury and Telford and more than 300 on call fire crew. 80 per cent of the Shropshire firefighters are on call to cover the large rural area operating from 22 fire stations.