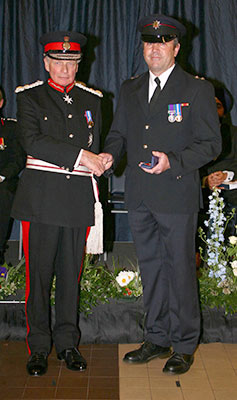 The Lord Lieutenant of Shropshire will tour Shropshire Fire and Rescue Service’s brigade HQ in Shrewsbury on March 5.

Sir Algernon Heber-Percy, who was knighted in the Queen’s New Year’s Honours, has strong links with county firefighters.

He is guest of honour at their annual awards ceremony each year when he presents good conduct medals to firefighters with 20 years’ service.

Chief Fire Officer John Redmond will conduct the tour of the St Michael Street fire HQ which re-opened two years ago after a major renovation to overhaul the existing 1970’s dilapidated buildings.

The VIP will see many of the specialist resources staffed by the Service including the Aerial Ladder Platform and the Water Rescue Unit and watch while firefighters carry out a realistic training exercise on the drill yard.

The Lord Lieutenant will meet many of the staff who keep the county brigade operating, tour the control room and see state of the art equipment for rapid mobilisation of fire engines.

The broad range of work undertaken by fire crews including Community Fire Safety Officers will be explained including how they create vital links with other county services to reduce fires in homes and businesses in Shropshire.

The VIP will also visit the emergency vehicle workshops which keep the county’s fire appliances and vehicles on the road to cover the county nearing a half million population and 16,000 businesses.

With the largest inland fire and rescue service in the UK, Shropshire has more than 100 firefighters based at 24 hour full time fire stations in Shrewsbury and Telford and more than 300 on call fire crew who leave their work to attend emergencies. 80 per cent of the county firefighters are on call to cover the large rural area operating from 22 fire stations.

An average of 300 people are rescued from crashes on Shropshire roads each year and the Service regularly attends animal and water rescues as well as flooding caused by severe weather conditions.