On the evening of Wednesday 14 October Shropshire Community Health NHS Trust hosted a training exercise at its Ludlow Hospital site to test emergency procedures; this was a joint exercise where Shropshire Fire and Rescue Service was also involved. The simulated incident was a fire gas explosion in a service tunnel this had knocked two maintenance engineers unconscious and one further maintenance engineer had managed to escape the tunnel with minor injuries to raise the alarm. The emergency services were contacted and two fire appliances, one from Ludlow and one from Craven Arms were sent to deal with the incident.

The two teams successfully carried out their task in what was challenging conditions, as the travel distance to the casualties was a sizable one, the service tunnel was totally unlit and in places fire fighters had to encounter confined space within the tunnel. The time elapsed from raising the alarm to the two casualties being rescued was only thirty minutes, the fire crews were praised on how well they had dealt with such an unusual incident with limited resources they had available to them.

An Associate Trainer and Retained Support Officer’s assisted in the running of this exercise.

Steve Perks from Shropshire Fire and Rescue Service commented: “We would like an opportunity to thank the members of staff at Ludlow Hospital including Karen Taylor, Keri Edwards and Steve Bromley amongst many others who were involved in making this area of the site available to use as a training venue.”

Karen Taylor, Locality Manager for Shropshire Community Health NHS Trust commented: “This was a really useful exercise to be involved with. Not only were we able to test and further refine some of our emergency procedure plans, we were also able to begin to develop a really important relationship with the local fire fighters.” 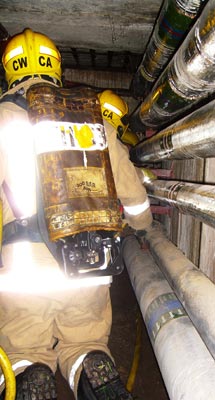