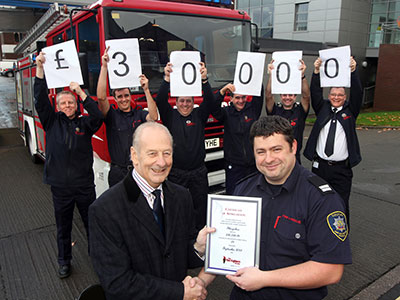 A record £30,000 has been raised by Shropshire Fire and Rescue Service over the past year in aid of the Fire Fighters Charity – most of it through washing cars.

Firefighters and staff from across the county collected the cash in a variety of events including car washes, and through donations and legacies.

Today they celebrated after receiving a Certificate of Appreciation praising their charity efforts from the Chief Executive of the Fire Fighters Charity.

“It is certainly a substantial sum raised from huge efforts by staff and volunteers from Shropshire Fire and Rescue Service. As one of the smallest brigades in the UK, it is a tremendous achievement,” said Stuart West, chairman of the Shropshire and Wrekin Fire Authority.

Ashley Brown, a Retained Support Officer based at Bridgnorth Fire Station, who is the charity co-ordinator said: “We would like to thank everyone who has donated money towards the charity. We appreciate that people have less expendable income, so being able to sponsor a person taking part in an event or giving during a car wash means a lot to everyone within the fire service community.”

A total of £30,238.95 was collected between April 2012 and 2013, revealed John Parry, Chief Executive of the charity which supports and rehabilitates past and serving firefighters and their families at three centres in England. They work with injured or sick firefighters to get them back to operational duties quicker than normal, as well as helping family members get back to a healthy life.