Home › What's New and Social › News
Steve Moorhouse, Operations Manager at Lloyds Animal Feeds. ….he is also in charge of Ellesmere Fire Station as an “on call” firefighter.

An appeal has gone out for more members of the public to apply to become retained firefighters across Shropshire.

Contributing to saving someone’s life is “quite a buzz”, said the man in charge of Ellesmere Fire Station.

During the day Steve Moorhouse (49) is an Operations Manager at a leading Shropshire company. Responsible for ensuring that Lloyds Animal Feeds is working smoothly, Steve is also the Watch Manager at the town’s fire station. 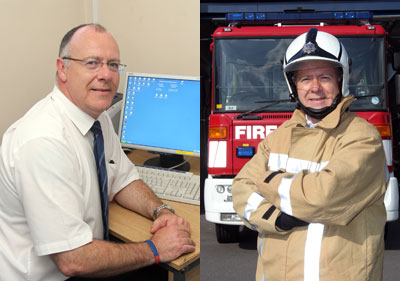 His company, like many others in the county, supports Shropshire Fire and Rescue Service by allowing firefighters to leave work “at the drop of a hat” when an emergency call comes through.

“It is very satisfying to go to a serious incident where you and your team are responsible for ensuring a successful outcome whether it is rescuing someone from a house fire or cutting them out of a crashed car to get them to hospital in time.”

Being a highly trained firefighter means you are able to “apply what you have learned” and deal with emergency incidents, said Steve.

“We go into situations where most sensible people would be running away from. But that is what we are trained to do.”

Today’s modern firefighter is responsible for educating the populace to prevent fires before they begin, stressed Steve.

“We knock on doors, go into the community and talk to people to get them to install a smoke alarm in their house, have an escape plan and ensure their home is safe to prevent a fire from happening in the first place. We have to be proactive in fire prevention rather than reactive. But we are ready to go wherever and whenever we are needed.”

The reputation and standing of firefighters is high in their local community, who know and respect them, he said.

A farming family from Hodnet are a big part of the fire and rescue service in the area with three brothers all “on call” firefighters at the village fire station.

Phil and Tom Benbow with younger brother Jonathan (23) all live at Back Farm, Hodnet, a stone’s throw from Hodnet Fire Station. 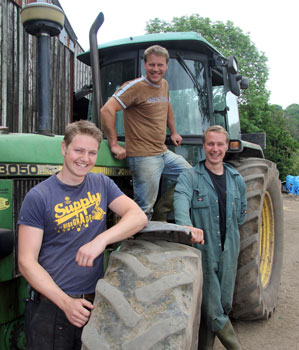 “If we are milking cows when the alarm call goes then we simply drop everything and answer the call,” said Phil (34), who works on the farm with his brother Tom (38), while their younger brother works for a shed company nearby.

But the farm work carries on smoothly as their wives quickly step in to continue the milking.

“It’s a family tradition. We all love it. My two boys are 7 and 5 and they seem interested for the future,” said Phil, who with his brothers, is part of a 13 strong on call firefighting force at Hodnet.

“We have some busy main roads with heavy traffic and there are a number of road crashes which we are often called out to attend as well as being prepared for any fires which break out in the area.” 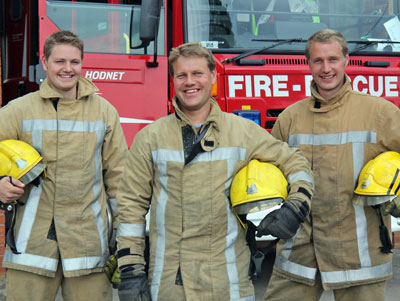 "Being an on call firefighter gives you confidence in life, you are very well trained and it means that you are helping people when they need it. We all love it," added Phil, who with his first aid training helped a passer-by who collapsed in Market Drayton recently.

But across Shropshire, older firefighters’ were now retiring and new, younger men and women were needed to take their place.

Firefighters must live within five minutes of their local fire station and be physically fit.