The Lord Lieutenant of Shropshire has praised Shropshire firefighters – including those from fire stations in Shrewsbury and north Shropshire - for “all that you do” for the people of the county.

“We are hugely grateful for what you do. You are never thanked enough. It is only in an emergency when people are affected,” said Algernon Heber-Percy at a special awards ceremony held at the Theatre Severn in Shrewsbury.

He also praised Chief Fire Officer Paul Raymond, who is due to retire next month, for his skill in “keeping Shropshire Fire and Rescue Service together” after implementing severe budget cutbacks.

“The hours of a firefighter are not conducive to family life and with the danger is the stress on families waiting at home,” the Lord Lieutenant told firefighters.

“We do take it for granted that you rescue people from fire in the middle of the night. You run towards a disaster when everyone else would run away.”

He praised them for their vocation which required commitment and dedication.

Assistant Chief Fire Officer Steve Worrall, based at Shrewsbury HQ, received the High Sheriff’s Good Citizen’s Award for his international humanitarian aid in supporting poorer fire brigades in Bulgaria, Romania, Czech Republic, Hungary and Poland. He organised the delivery of 14 redundant UK fire engines, hundreds of desperately needed firefighting uniforms and rescue equipment. Under funded orphanages and a home for the handicapped in Romania have also been helped by Steve and colleagues over the past few years. 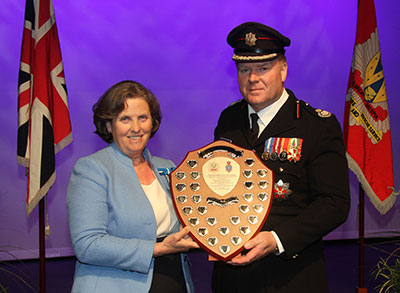 Receiving the Long Service and Good Conduct awards were Cameron Taylor who has served on the operational side at all three wholetime stations as a firefighter, Crew Manager and Watch Manager and worked in both Business and Community Fire Safety. He works in Business Fire Safety at Shrewsbury fire HQ.

Cameron has been involved in a community safety exchange visit to Lisbon, Portugal and has represented the brigade in national fire extrication competitions. He lives with wife Niki and has three teenage daughters, Anya, Isla and Erin.

Ian Laffey, based at Shrewsbury, started his fire service career in Cheshire and East Sussex before joining Shropshire Fire and Rescue Service in1998. He enjoys mountain biking and hill walking and is a regular veteran football player and is the oldest scorer for the open ages football team. He is married to Jane and the couple have two children, Joseph 16 and Katie 14.

Lynn Walker, who also received the Long Service Award has worked as a receptionist at the Training Centre, in Admin Support and Management Support at Brigade HQ before moving to Fire Safety Admin Support and is now an Inspecting Officer. She lives with her partner Richard Ball and has five grown up children and a granddaughter, Ruby two. Lynn enjoys swimming, reading and looking after Ruby.

Yvonne Thayer joined Shropshire Fire and Rescue Service on March 29th 1991 and has always worked in the Training and Development Centre. Her most memorable moment was playing a part in the Service achieving its first ever Investors in People accreditation in 2000. This was made especially memorable by the unexpected response of the Brigade Training Officer (later to be Chief Fire Officer) who picked her up and twirled her around in front of a number of staff who just happened to be in HQ reception at the time! Yvonne lives with her husband, Andy and they have two grown up sons, Dan and Ben. 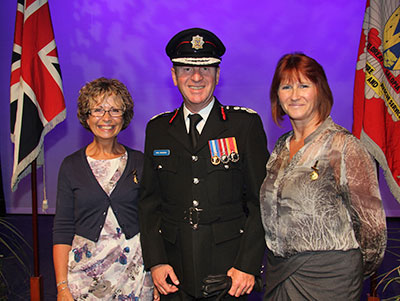 Alan holds bingo nights raising money for charity, including one that made over £1,000 in one night. He enjoys playing bowls, cricket, darts, dominoes, pool and snooker. He is married to Emma and they have one daughter, Charlotte, 11.

Chris Morrisey, who works for RAF in Shawbury as Crew Manager in their fire section has done various courses at the Firefighters College and charity work including sponsored car washes. Married to Patricia, they have two daughters, Helen 12 and Sian 18. Chris enjoys running, sub aqua diving and is a British Sub Aqua Club instructor.

Prees firefighter Jeremy Chambers works with Prees Auto Services which allow him to instantly leave work to respond to emergencies. During his career he has been involved in incidents country wide with the High Volume Pump Unit which is based at Prees.

He assisted at incidents in Yorkshire and the Buncefield. A keen motorcyclist and charity fundraiser, Jeremy is now undertaking the development crew manager’s programme. Married to Anne, the couple have two children, Katie Louise, 9 and Sophie Mae, 3.

Steve Moorhouse, whose “proudest moment” was when he was promoted to Officer in Charge at Ellesemere Fire Station joined Shropshire Fire and Rescue Service in 1992. He has worked for Lloyds Animal Feeds for 25 years as their Operations Manager. Steve is married to Jane and they have three grown up children and a granddaughter, Lottie, 22 months.