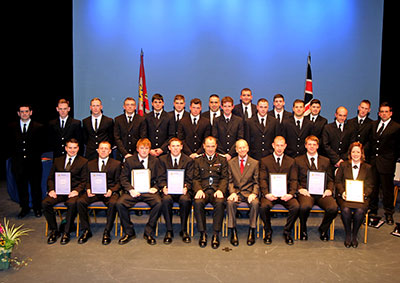 (all the recruits) Chief Fire Officer John Redmond and chairman of Shropshire and Wrekin Fire Authority Stuart West with the latest on-call firefighter recruits for Shropshire Fire and Rescue Service at a passing out ceremony at Theatre Severn, Shrewsbury, last night. (Monday, Nov 18)

The latest firefighter recruits to join Shropshire Fire and Rescue Service celebrated the end of initial training preparing them for a future of fighting fires, rescuing victims after a car crash, teaching people how to prevent fires, or whatever comes their way in their new careers.

A total of 38 join the county’s 300 on-call firefighters who provide 80 per cent of fire cover for Shropshire. They live or work within five minutes of their local fire station and turn out at all times of the day and night to protect their local community.

They come from all walks of county life and hold other jobs ranging from a horticulturist to handyman, forest manager to farm labourer, tree surgeon to tradesmen, and include fork lift truck drivers, tool designer, nurse and even a national hot-rod champion.

Brothers Lance and Shane Evans, who join colleagues at Newport Fire Station, are workmates at Denso Manufacturing in Telford where they are both fork lift truck drivers. Shaun Harrison (40), a father of three, who runs a snack bar outside Ludlow Fire Station where he has been feeding firefighters for the past two years, joined the on call service after losing seven stone to pass the medical.

“I failed my first medical but I was just determined to do it and the lads from Ludlow Fire Station encouraged me,” said Shaun, a gym regular who slimmed down from 24 stone to 17 stone and gave up a 100 a day smoking habit to get fit.

Firefighter colleague Stuart Humphries said: “Shaun has worked so hard for the past two years to pass the fitness tests. He was so determined to get there.”

Firefighters go through “a gruelling” training programme and have a demanding and challenging job to do, said Chief Fire Officer John Redmond.

He told the new recruits: “You are a member of a select group of people from local fire stations who are held in high esteem by members of the public.”

Business owners were the “unsung heroes” who let firefighters stop work immediately their pagers went off.

“Without you we would not have a retained firefighter service in Shropshire,” said Mr West.

The celebration of success event held at Theatre Severn in Shrewsbury last night (Monday, November 18th) involved 22 firefighter recruits who have completed the first stage of their training before going on to further development training. They were joined by 15 recruits who had completed three year firefighter training and two staff members trained as on call fire control room staff.

If you are interested in becoming an on call firefighter visit our recruitment pages or call 01743 260 200.