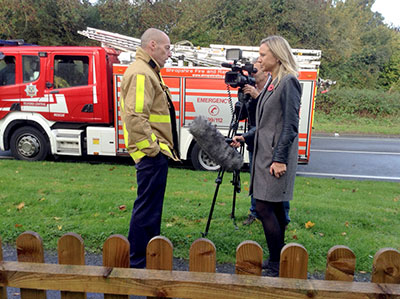 Shropshire Fire and Rescue Service transmitted its fire safety messages about the importance of smoke alarms far and wide with the help of the local media.

The story of how a mother of three and her children escaped a ferocious house fire due to a smoke alarm waking them in time was broadcast across Midlands TV news, in the Shropshire Star evening newspaper, on BBC Radio Shropshire and on news websites.

Martin Timmis, an Area Manager for Shropshire Fire and Rescue Service, appeared on Central TV to talk about the importance of every home having smoke alarms on each floor of a home. While firefighter Stuart Ruston told their reporter about the ferocity of the fire when they arrived on the scene within a couple of minutes of receiving the emergency call.

Rabinder Dhami, Community Fire Safety manager for Shropshire Fire and Rescue Service, spoke to a BBC Radio Shropshire reporter in the fire damaged home and praised the landlord of the rented property who had fitted two wired smoke alarms and a carbon monoxide detector.

The Fitzimmons family of five were left “homeless but alive” after fire ripped through their Telford home in just a few minutes earlier this year.

They helped to t send out the message for everyone to get a smoke alarm by joining the Tick, Tock Test campaign to ensure everyone also checks their smoke alarm when the clocks went back tin October.

Mum Vikki (34) and her three children were all soundly asleep in the four bedroomed semi in Brandsfarm Way, Randlay, when they were woken by the sound of the smoke alarm after an accidental fire had started upstairs in the airing cupboard.

“I hadn’t slept well for three days as we had just moved into the house and if it wasn’t for the smoke alarm going off I am sure that me and my three children would all have died,” said Vikki, a former nursery teacher. 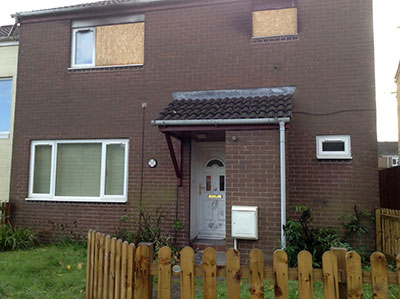 The Telford home where smoke alarms saved the family

Vikki quickly got all the children out of their bedrooms before she and eldest son Joshua (12) went to tackle what they first thought was a small fire. But the flames rapidly spread into the loft and neighbours arrived to help when they saw thick black smoke pouring out of the roof.

“I thought we had put the fire out but it got between the plasterboard walls and spread into the loft. My neighbour shouted for us to get out so I scooped up the children and got them out. Flames were quickly at the first floor landing and my neighbour got me out.

Within minutes of the smoke alarm going off, bedroom windows “popped” as the upstairs was engulfed in flames.

Firefighters arrived to put out the fire and rescue as much of the family’s belongings as they could. Community fire safety officer Rabinder Dhami praised the landlord of the property for fitting two wired smoke alarms and a carbon monoxide monitor inside the rented property.

The Fitzsimmons family said they had been “overwhelmed” by the generosity of neighbours as they had only moved into the home three weeks before and had still not unpacked all their belongings.

As the family were rehoused, friends, neighbours, and colleagues at UTC Aerospace Systems in Wolverhampton rallied round to provide clothes, toys and household goods helped by Simply Gym from Stafford Park, Telford.

The family had been due to renew their home insurance but “hadn’t got round to it.”

“Smoke alarms save lives. We were homeless but alive because of them. I dread to think what could have happened if ours hadn’t worked,” said Vikki, whose husband Kevin had left for work on the day of the fateful fire.

“There was nothing left to salvage from my children’s bedrooms. Everything was twisted and destroyed with the heat. There is no way I would have had my babies if we hadn’t had a smoke alarm. The fire spread so quickly.

“It is horrendous to think about it but I urge everyone, if they haven’t got a smoke alarm, to get one fast and to regularly check that it works.”

Because of the friendliness of neighbours, they are hoping to return to the family home once extensive repairs have been carried out. Vikki has now started a Community Chest Telford campaign to collect clothes and household goods to help other homeless people in a similar situation.

“I set up the campaign to help others in a similar situation or people that are in need and would benefit from a little help. Everything that is donated is given back to people in need in the local community in order to help them,” said Vikki. 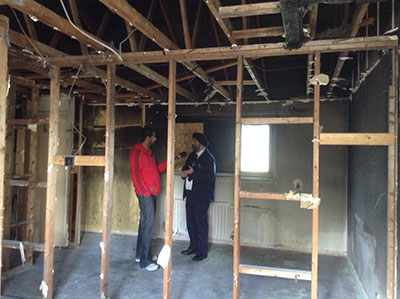