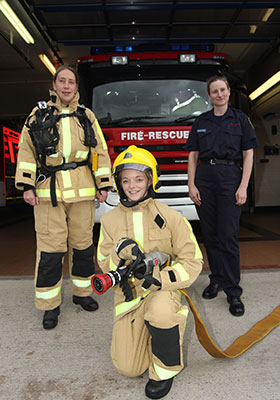 Women from across the county came to Oswestry Fire Station to see what life is like as a Shropshire firefighter.

A total of 13 attended a “taster” session organised by Shropshire Fire and Rescue Service which is keen to recruit more women into the service.

They were shown around the fire appliances, put on the uniform and tried out breathing apparatus under instruction from the crew at Oswestry Fire Station.

Most tried the “step test” with a fitness instructor and learned about the recruitment process and how to apply to become a member of the retained in Shropshire.

80 per cent of Shropshire’s firefighters’ are “on call” and “bleeped” to attend the fire station in an emergency. They have to live or work within five minutes of their local fire station and turn out for duty at any time during their agreed on-call rotas.

Laura Kavanagh-Jones, of Shropshire Fire and Rescue Service, said the event was a success with a number of women keen to join up.

“We want to encourage women to look at becoming part time professional firefighters. There have been women firefighters in fire stations in Shropshire and across the UK for many years now but it is a career that many women just don’t think about,” she said.

“We provide training, support, promotion opportunities, excellent pay and conditions of service and a strong commitment to equality. If you want a rewarding career that is a little bit different then firefighting could be the job for you,” added Laura. 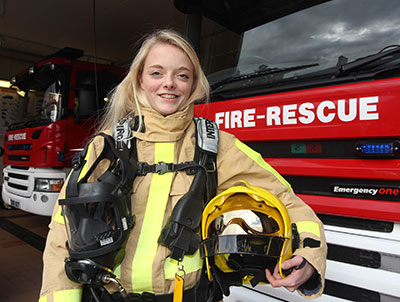 Laura Davies at the taster session

Lisa Baer, of Market Drayton, said she had learned a lot at the taster session and was keen to “make a go of it.”

Mum Paula King (27), from Oswestry, said it was “something completely different.”

Sara Davies, from Oswestry, said it had been “a great day” and she was keen to sign up to become a retained firefighter.

Firefighters are physically fit and highly trained. They attend weekly training sessions to keep their skills up to date and are called out to deal with fires, floods, road traffic crashes, animal rescues, building collapses, and any other major incidents.

If you live within 5 minutes of your local fire station in Shropshire and would like to attend future women taster days please contact Laura Kavanagh-Jones on laura.kavanagh-Jones@shropshirefire.gov.uk