The fire and rescue service in Shropshire and Telford and Wrekin is “planning for the worst” after a further £1.6m cost cutting demand from central Government as part of its austerity programme.

Fire station closures, firefighter redundancies and a possible merger with a neighbouring brigade are being considered among a 50 strong list of options to be explored over the next 12 months.

“I still hope that the national economy will recover and the cuts to 2020 will be less than predicted. But we must still hope for the best and plan for the worst,” said Chief Fire Officer Paul Raymond in an open letter to staff.

The service has already cut £3.2 million from its £20m annual budget with a 10 per cent cut in firefighters and support staff and a 25 per cent reduction in senior officers. This follows a “severe streamlining” of all its services including cuts in successful community fire safety programmes which, over the years, have resulted in a reduction of fires across the county. 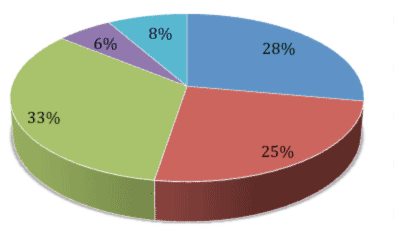 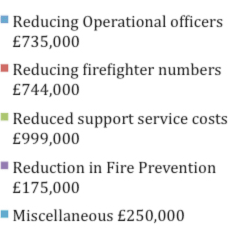 Pie chart shows where £3.2 million has been already cut from the Shropshire Fire and Rescue Service budget – with more severe cuts on the way

Further cuts will be “even more difficult” as they will impact on all areas of Shropshire Fire and Rescue Service which attends hundreds of fires in homes and businesses each year, attends on average 300 county road crashes each year to release trapped victims and carries out water rescues, animal rescues, pollution incidents and supports national and neighbouring counties in serious incidents.

“None of these options are easy or desirable to deliver but they are the few remaining options we have left,” said Mr Raymond, who is asking staff for their “honest views” on the risk and impact of the latest proposed cuts.

Cuts hitting “the frontline” will have numerous and complicated implications which need to be understood, he said.

“Only when we have a full picture of the impact of each change will the Fire Authority be in a position to make the difficult decisions in the early part of 2014 about which options should be taken out to the public for their views,” said Mr Raymond.

Consultations will be held with the public before final cost cutting decisions are made next year, he added.