A large scale traffic pile up on a county road put Shropshire’s emergency services to the test during a major training exercise last night involving up to 50 firefighters, police and ambulance personnel. (Thursday Oct 6th)

A total of nine people were injured in a six vehicle pile-up – but it was all a vivid re-enaction as part of a multi agency exercise organised by Shropshire Fire and Rescue Service.

Trapped inside crushed cars strewn across a road were “victims” played by St John’s Ambulance volunteers to test the reactions of 999 crews.

The multiple vehicle collision acted out on a stretch of road at the Ministry of Defence base in Donnington, Telford, enabled emergency crews to get together to practice their skills and test their joint response at a large crash scene.

Five fire engines and four ambulances arrived at the scene to cope with the dead, injured, trapped motorists and passengers. More than 30 firefighters from MOD Donnington, Newport, Hodnet, Wellington, Shrewsbury, Minsterley and Oswestry, were at the scene working alongside ambulance crews with officers from Telford police. Eight staff including four student paramedics from West Midlands Ambulance Service were also taking part.

Firefighters removed windscreens and car roofs working together with paramedics to stabilise the injured.

Incident Commander Neil Griffiths said the exercise had been very useful as a practical “hands on” exercise for emergency crews with everyone working well together. Organiser Mark Smith, of Shropshire Fire and Rescue Service, said that it was a “rare” opportunity for all three emergency services to get together to practice their skills. 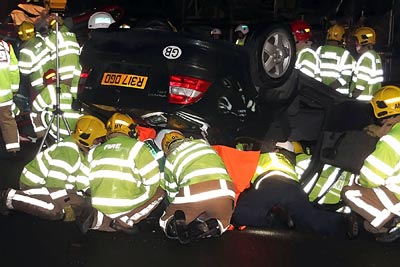 During the practice, control rooms at each emergency service and incident commanders were monitored as they dealt with the unfolding crisis.

“It has been a very worthwhile exercise in realistic conditions giving all the agencies the chance to work together and practice our techniques. This is invaluable training for all the emergency services,” said Mr Redmond.

From April 2009 to January this year, firefighters attended a total of 600 road traffic collisions in Shropshire in which 20 people died and 370 were injured. Road crashes are the biggest killer of 15 to 24-year-olds.

Shropshire’s Chief Fire Officer Paul Raymond, who is responsible for road safety for the fire service, is encouraging all motorists to become advanced drivers in his role as president of the county branch of the Institute of Advanced Motorists.

Drivers aged between 17 and 25, are eligible for the advanced driver training as part of a joint scheme between Shropshire Fire and Rescue Service and Shropshire IAM. Visit www.advancedmotorists.org or call 0845 0945 650 for details.