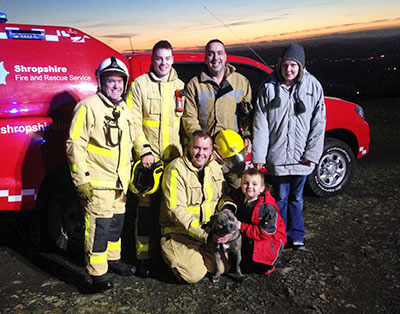 Walkers have been warned to be vigilant after a dog vanished down a 25ft hole – the second pet to be rescued by Shropshire firefighters from the same area of old mine workings on Clee Hill in the past five years.

Fire officers today issued a warning for people to take extra care in the area after Marley, a grey Staffordshire terrier, was rescued from the bottom of a concrete lined storage container after his owners raised the alarm.

He had disappeared down the hole after running into a disused building while on a walk with his owners and their six year old son.

On-call firefighters from Ludlow, who were at Ludlow Fire Station after returning from a road crash, were on the scene within ten minutes of the alarm call.

Deborah Ellsey, the dog owner, was reassuring her pet as firefighters arrived on the scene. They used a triple extension ladder for firefighter Martin Owen to climb down and use line safety equipment to bring the family pet safely back to the surface.

John Taylor, Watch Manager at Ludlow Fire Station, today urged walkers to keep their dogs on a lead and children close by when walking in the area of the disused mine building where there are a number of uncapped storage containers.

“This is a warning to people. It could have been another story if the young child had wandered into the building. Fortunately the dog appeared shocked with some bleeding from his paws but was mainly unscathed by the ordeal,” said Mr Perks.

He said the early evening incident on Tuesday this week was the second time a dog had fallen down one of the storage containers.