He has been recognised for his services to the people of his hometown Whitchurch and Shropshire as a result of his career as an on-call firefighter spanning over 44 years.

Simon, who lives in Whitchurch, said:

“I’m really quite overwhelmed. I could not have achieved this without the unwavering support of family, the team at Whitchurch station and the many people who have been involved in my life and work for so many years.

"I Joined Shropshire Fire and Rescue Service in 1978 and plan to continue serving my community until my retirement.  I’ve been lucky enough to enjoy a rich and varied life as an on-call firefighter, attending many incidents which I’ll never forget and making friends for life. I was part of one of the first emergency services to arrive at the IRA bomb incident at Tern barracks, Market Drayton in 1989 and volunteered to search the building for casualties, whilst under the threat of further explosions.

"My wife Sharon and our two daughters, Kelly and Helen, are delighted at the news and we are looking forward to the presentation of the medal.” 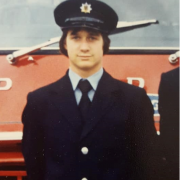 Left: Simon pictured in 1978 as a new recruit to the fire service.

Chief Fire Officer, Rod Hammerton, had words of thanks for Simon who has been the manager of Whitchurch station since 2012.

“Simon has provided a vital role to the community of Whitchurch as the manager of the local fire station and more widely in Shropshire as part of the group support team. His commitment and dedication over 44 years has quite rightly been recognised.  This medal is testament to that and all of the invaluable work he has contributed to the people of Shropshire”.

Simon will have his medal presented to him by Her Majesty’s Lord Lieutenant for Shropshire Mrs Anna Turner later in the year.