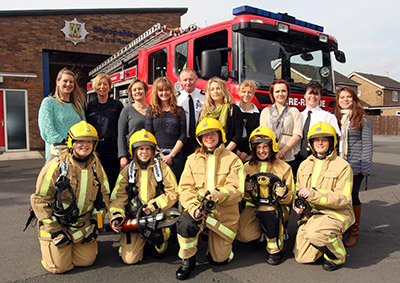 Women who want to be firefighters turned out for a “taster” session at a Shropshire fire station.

More than a dozen women learned how they could join the county’s 300 plus “on call” fully trained firefighters who deal with around the clock emergencies.

More “on call” fire crew, who live or work within five minutes of 22 county fire stations, are needed to turn out for a set number of hours each week to answer 999 calls.

Mother of two Ruth Walkerdine, who is one of three women based at Hodnet fire station, said recruits had to be physically very fit to join Shropshire Fire and Rescue Service.

“Before I joined I had good cardio but I needed to do upper body strength training because I had to use muscles I’d never used before. Blokes are stronger than us but we have to be able to lift a certain amount. You don’t have to be a body builder but I practised press ups.”

Mum Debbie Davies (42), joined Hereford and Worcester Fire and Rescue Service when she was 24. She is now a Watch Commander in charge of 80 plus fire crew.

“Anything they can do, we can do. It is a chance in a lifetime, if you want to do it.”

Hairdresser Diane Abbott (47), from Clun, who enjoys hill walking said she wanted “a new challenge” after recently separating from her partner.

Clun nursery nurse Kathryn Frost (28) said: “Why not? I’m young, fit and able and it is something I have always wanted to do.”

Former university admin officer Sarah Jamieson, a mother of two from Ludlow, said: “I’m looking to come back to work and I want to do something exciting and unusual and do some good.”

German born Ina Roeltgen-Anslow (42), a Minsterley vet who has lived in Shropshire for the past 13 years after marrying a farmer, said: I want to find out if I am interested in it. I would enjoy the team work of being a firefighter. It is exciting.”

The would be recruits heard how they had to pass job related physical tests proving they could work in confined spaces, were confident at heights and were strong enough to put a 13.5 metre ladder back onto a fire appliance with other crew members.

Tests carried out at the brigade’s training school at Telford fire station include applicants having to climb a ladder, carry equipment wearing full fire kit around a course for almost six minutes and negotiate a blind gallery area wearing breathing apparatus. They also have to carry an adult sized dummy along a 13 metre course within 41 seconds and pull apart and reassemble equipment in just over five minutes.

For information on how to become an on call firefighter contact Shrewsbury fire HQ on 01743 260 200.