Shropshire businesses are being warned to check their fire safety after fire officers identified a “worrying trend” among some firms which are putting lives at risk.

Fast food outlets with accommodation above are especially at risk.

Many business owners do not have integrated fire alarm systems fitted because they wrongly believe them to be too expensive, said Watch Manager Martin Huckle, Rural Fire Safety Supervisor for Shropshire Fire and Rescue Service.

“They don’t even have domestic smoke alarms on the premises. Wireless interlinked systems can cost under £50 per unit making the total cost to cover a whole property with three floors only a few hundred pounds. It is a myth that we are trying to dispel that it will cost £1,000’s to fit a suitable fire alarm system. But these systems will provide an early warning of a fire and could save a life,” he said.

Such multi-floored properties now used as business premises were not purpose built for hot food sales and are seriously at risk because they share just one escape route on the ground floor.

“A fire on the ground floor will rip through the building and trap people living above,” said Mr Huckle.

Owners must assess the risk of their own business premises and take action to protect people or they may face enforcement action.

Prohibition notices have been issued to eleven county premises over the past year, six of them fast food outlets, to restrict people living or sleeping above and protect them from fire breaking out.

Such properties should only be used for work and not living in, unless adequate fire safety measures are in place he stressed.

“Business owners must act. They cannot do nothing or lives will be lost,” said Mr Huckle.
Enforcement action by Shropshire Fire and Rescue Service comes in the wake of a serious fire at Whittington Fish Bar, near Oswestry, in June this year where fire officers had identified problems. 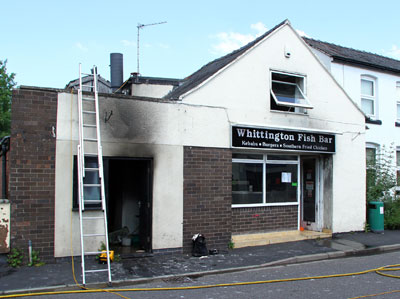 They issued enforcement action which resulted in the owners installing an integrated fire alarm system and protecting escape routes.

Soon after the fire prevention action was taken, a serious fire broke out and luckily the new owners escaped.

“If it had been a night time fire, they probably would have lost their lives if the owner had not been forced to take action,” added Mr Huckle.